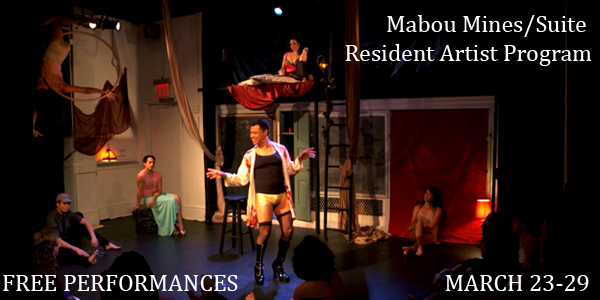 2014-15 RESIDENT ARTISTS:
PAULINA BARROS: “THE COMFORT OF NUMBERS 2.0” – Taking the intersection of different and often distant worlds as the outset, this project strives to create a bridge between science and art, explore the boundaries between one artistic discipline and another: sound, music, dance and theater, and touch upon intercultural relationships. The comfort of numbers is about interconnectedness; about our personal relationships with others, with reality and with life. Playing with perception and proportion, the very small; such as subatomic particles, our individual tragedies and miracles is contrasted with the very big; the universe, Love and Death.

Swedish performer and writer Stephanie Hayes and British dramaturg and performer Emily Reilly seek theatrical ways of letting our inner noise leek out; a theater of fragments that drolly illuminates life’s absurdities by relating the grand and monumental to the tiny and banal. They are interested in memory, discomfort, confusion and the impossibility of language. Always deeply collaborative, their work merges dance, theater and visual art in an attempt to create formally rigorous explorations of the paradoxes of life.

ANDREA THOME :
“THE NECKLACE OF THE DOVE”
Writer: Andrea Thome
Director: Lisa Rothe
Music: Amir Khosrowpour
The world of 21st-century immigrant, transsexual women in Queens intersects with the 11th-century love stories of Arabic-Spanish philosopher Ibn Hazm. Through text, music and movement, these refugees from different eras travel between languages, genders and ways of loving – enacting their own Reconquista and reclaiming a pluralistic world.

ALL PERFORMANCES
FREE TO THE PUBLIC