María Irene Fornés and the Garden of Our Potential

By Vinson Cunningham, excerpts below 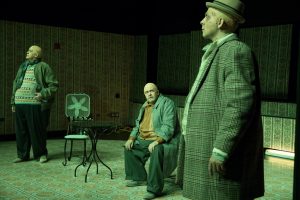 A scene from the trippy, abstract staging of “Drowning.” Photo by Julieta Cervantes

“Mud” and “Drowning”—two plays by the great María Irene Fornés, directed as a chiming pair, at Mabou Mines, by JoAnne Akalaitis, with newly composed music by Philip Glass—both take as a subject the hunger for knowledge that is the troubled mark of our species.

“Mud” is about a barely literate—but learning—woman named Mae (Wendy vanden Heuvel). She lives with a childlike man named Lloyd (Paul Lazar), who subsists in a wild, seemingly feral stupor. Unlike Mae, who goes to school, cherishes her textbooks, and thinks of her clumsy attempts at reading comprehension as “intermediate,” Lloyd wallows in his ignorance, thinking only about erectile problems. Apparently the two—who present, alternately, as bizarre siblings and doomed lovers—have quit trying to have sex. Early on, Lloyd insists, unconvincingly, that he “got it up yesterday!”

So much of Fornés’s inimitable dialogue, here and elsewhere, sounds like this: classical and primitive and modernist all at once. Listening from the audience, you can hear the loose logic of her comma splices: thoughts crowd in on one another. She wrote these voices like someone thinking of a cave painting but sitting in the sculpture garden at moma. Her characters speak with deceptively frank simplicity, using short, declarative sentences, all saltwater and lulling tang, illustrating the slow process of inner accretion that ends with a dire necessity for outward change.

The mythic cast of the characters’ speech (and, in due time, the brutality of their actions) put me in mind of the Eden story—the tantalizing, elusive idea of escape by way of education makes Henry a kind of serpent, dangling his relative worldliness as fruit from a forbidden tree. Akalaitis’s production, modern and elegant, helps that feeling along. The lighting scheme, eerie with ambient neons, by Thomas Dunn, is simple and hip and emotionally astute. Glass’s cold melodies break up the scenes, and make certain moments of high tension seem as though they were snatched from a thriller.

“Drowning” is a spaced-out, somewhat trippy five-page play that Akalaitis and Glass have made into a near-abstract opera. (As in “Mud,” the music director Michael A. Ferrara plays keyboard; he’s joined, in “Drowning,” by Anna Bikales on harp.)

“Mud” and “Drowning” are plays about the strange wilderness that grows when the garden of our potential—that basic but infinitely varied form, whose thirst for more life is never slaked—goes untended.

Read the full review at NewYorker.com.

In Mud/Drowning, Dreamers Reach for the Unobtainable

By Zachary Stewart, excerpts below 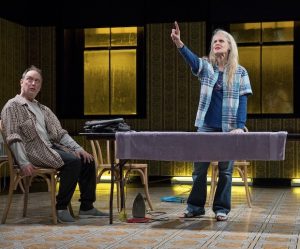 “We are all in the gutter, but some of us are looking at the stars,” says Lord Darlington in Oscar Wilde’s Lady Windermere’s Fan. This aphorism certainly applies to the protagonists of Mud/Drowning, a pair of one-act plays by the late playwright María Irene Fornés, now appearing under the banner of Mabou Mines at 122CC. With devastating precision, Fornés dramatizes the feeling of reaching for a shooting star that seems tantalizingly close, only to be pulled back down into the muck.

This terse distillation of life has somewhat played out in the show’s own production history: Mud/Drowning ran briefly in early 2020, closing a week before the Covid pandemic ended live theater for over a year. It was set to return to the Public Theater’s Under the Radar Festival earlier this year, but that too was foiled by Covid. Now audiences can experience this heartbreaking double-feature, which JoAnne Akalaitis has directed with meticulous economy.

[With Mud,] Akalaitis matches the writing style with a staging that exists halfway between table read and full production, eschewing frills for the bare essentials. Sifiso Mabena recites stage directions from a stage left chair, subtly judging the proceedings with every crinkled nose and dragged vowel. Lazar embodies a foul character (he reveals to Mae that he fornicates with pigs) through childish demands and rageful screeches, yet he miraculously manages to make us feel some sympathy for Lloyd through his howls, which conjure an animal in agony. Deploying perfect comic timing, Torn is hilarious and pathetic as Henry. Vanden Heuvel simultaneously conveys exhaustion and endurance as Mae, wielding a hot iron like a weapon as she presses trousers on a makeshift ironing board. We get the sense that she is enacting a timeless story of ambitious women thwarted by the impulse to provide care.

[…] And don’t ugly sea monsters deserve love too? [Gregory] Purnhagen powerfully makes the case through a warm tenor that exudes a gentle longing. [Peter] Stewart and Tomas Cruz (who plays a mysterious third character named Stephen) both seem older and colder — wise to the realities of the world and the potential for asphyxiation above the surface. This shortest of operas ends an already depressing evening on a painfully beautiful note of sadness.

Mud/Drowning is a perfect tribute to Fornés, a writer of striking originality whose plays still seem to contain galaxies undiscovered.

Read the full review at TheaterMania.com.

By Maya Phillips, excerpts below 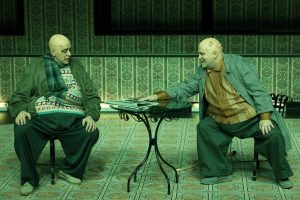 The production’s treatment of “Drowning” (1986), a work of just five pages, is more on par with Fornés’s pithy play about three freakish figures who discuss life and love. “Is this why we have come to live? To love like this? And hurt like this?” asks Pea (Gregory Purnhagen), one of three sickly looking men with face sores and unnaturally bloated bodies, in neutral tan-and-brown wardrobes.

Here “Drowning” is scored to a new “pocket opera” by Philip Glass, performed by Michael A. Ferrara, the keyboardist and musical director, and the harpist Anna Bikales. It elicits a multitude of sensations in the brief 30-minute performance: A bold, steady rhythm unexpectedly stops and restarts like a game of Red Light, Green Light; a mounting crescendo spells drama and heartbreak even when the action onstage is static.

Along with Caryl Churchill and Edward Albee, Fornés made stages weird for decades before she died in 2018, influencing those eminent playwrights and many more — even though her work isn’t as widely known today as that of her peers. Her characters live in weird corners of the imagination, where uninhabited desire and grim existential queries abound. Such spaces need no introduction or justification: It should feel like an honor to be a stranger in Fornés’s strange lands.