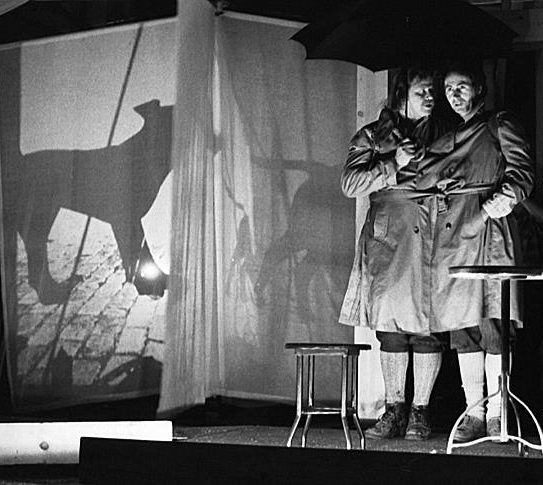 Adapted and Directed by

“SAMUEL BECKETT’S novel “Mercier and Camier,” written in 1946 but not published until 1970, is in many respects a fictional godfather to “Waiting for Godot.” Two cronies — the tall, bone thin Mercier and little, fat Carrier cousins to Didi and Gogo in “Godot” —embark on an aimless journey “toward some unquestioned goal.” The novel is a labyrinth, filled with vaudeville comedy. These are two tramps in mudtime who manage to survive in what the author regards as a world of “hospitable chaos.”

Because much of the book is in dialogue, it may appear deceptively simple to adapt to the stage. Actually it is probably as difficult a task as it would be to turn “Godot” into a novel. “Mercier and Canier” is filled with jump cuts, authorial diversions — after a rhapsody about geography, Beckett comments self‐critically, “End of descriptive passage” — subsidiary characters and a landscape that swings from bog to bordello.

In such circumstances, Frederick Neumann, who has adapted and directed “Mercier and Camier,” and plays Mercier, must be considered as intrepid a man as the title characters. Nothing seems to deter Mr. Neumann, a member of the Mabou Mines experimental theater troupe, in his attempt to turn‐and‐turnabout the novel into play. With a rippling electronic score by Philip Glass, the adaptation opened last night at the Public Theater. “